As a casual player, I’m never into specific grind of power items, overall artifact power, or god forbid simulations and calculators. I’m just playing the game, and whatever power ups I get, I’m happy with. Yet the new systems are worth of my opinion cause they answer the question what shall we be doing in 8.3. before and in between raiding queues.

Alors, the new/old zones of Uldum and Eternal Blossoms will provide us with daily content, world quests, events and such. There will be a couple of new factions, with mounts and other common rewards. I presume the rotation is weekly, with one zone under heavy invasion and the other with small Void incursions. This is a cool design in my opinion, because it keeps both zones active, and you can still progress with rep, unlike warfront rotation where all the activities shut down if your faction doesn’t control the zone. 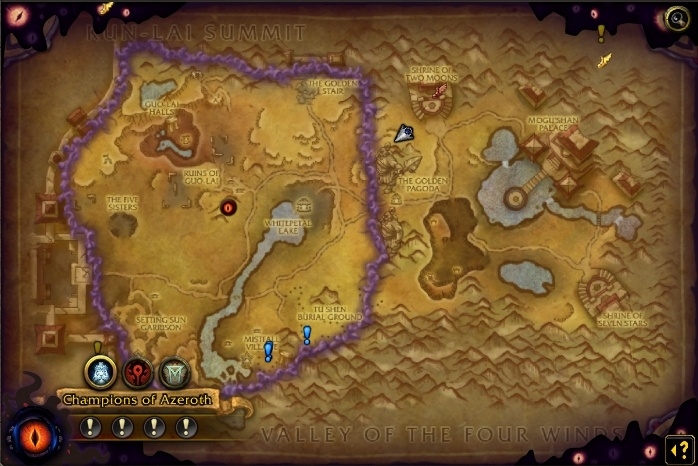 Apart from rep, tokens and other final patch faction rewards, we will get the currency which lets us to participate in Horrific Visions scenario where we upgrade our brand new artifact cape.

Every next scenario attempt during the week will cost twice as previous: 100/200/400/800/1600, 1600 being the highest number. Numbers could change, but for what I see in the PTR screenshots, we can try Horrific Visions several times per week.

Azerite necklace is gonna get an interface and power upgrade, so we could insert a couple more perks in the slots:

Hopefully this will not involve any quests, because I wouldn’t like to grind this again to see the story :) Anyways, leveling to 70 was pretty climactic.

Finally, the gear items that we get from different activities will be Corrupted. This comes instead of Warforged/Titanforged system, and is a new Blizzard’s take on the customization.

Blizzard openly acknowledges in a blue post that having a Forged item option seems like a neverending goal. I may be one of the very few players for whom the system worked as intended – that is, being happy for an unexpected bonus, and that’s it. For many more others, especially high-end players, received items seem to never satisfy you unless it’s top-Forged. So the system turns into a source of grind and frustration.

Enter Corrupted gear. A corrupted piece will have a powerful bonus (positive effect) and a negative effect – corruption points. The more corruption points on your gear you have, the stronger will be N’Zoth’s effects on your gameplay: from cutting your movement speed on early levels to spawning void zones and reducing healing received on higher levels. The design is really cool for competitive players: your skill could take full advantage of positive effects, while clever positioning and masterful playing could negate the negative effects.

Sidenote: I could already see where it backfires: trolls or unexperienced players would flood the LFR encounters with extra void pools from their gear :) My oh my, Ny’alotha is gonna be fun!

For us, rookies, Blizzard also has things in sleeve. First, upgrading your Wrathion’s artifact cape will not only help you in Horrific Visions, but also negate a portion of corruption, so you could wear more corrupted gear. Second, you could totally sacrifice both positive and negative effects by click. You just need to visit Heart Chamber, cleanse it from corruption free of any charge, and go use the piece of gear as a common one. That’s what I’m gonna do immediately!

In my opinion, this is a nice design which opens lots of ways to customization and serves all players at the table.

Cherry on top, this is announced to be a one-time system for 8.3. only, thematically linked with the Old Gods. Hell, you can even go and cleanse all your items from corruption as a symbolic act once you defeat N’Zoth, get Ahead of the Curve, or whatever is your goal :)

It doesn’t mean it can’t go on though. In the next Death expansion it could be easily renamed into Decaying gear, be it proved successful.

Let’s put all pieces of puzzle together.

3. We have wide options of gear customization depending on your skill and desire to compete in high-end content.

What I see now is a perfect synergy between new systems, interwoven into gameplay and letting you to progress gradually, without burning out in the first week. Failed azerite system falls into the background, much criticized titanforged system waves goodbye, and Blizzard works hard to implement something completely different. Hopefully they will be succesful.

I haven’t yet decided the role of alts in all of this. My main will naturally get Exalted with both factions, I need to upgrade the cape to full at least once for lore, and complete Horrific Visions for both Alliance and Horde.

Other alts just need their entry item level to Ny’alotha. How hard they devote themselves to daily activities, is a question I can’t yet answer. Well, in any case it’s something to do while in queues.

Looks interesting on paper. How cool and engaging is it gonna be? We’ll learn in 2 weeks.