Skip to content
HomeTomb of Sargeras: A Peep into The Gates of Hell 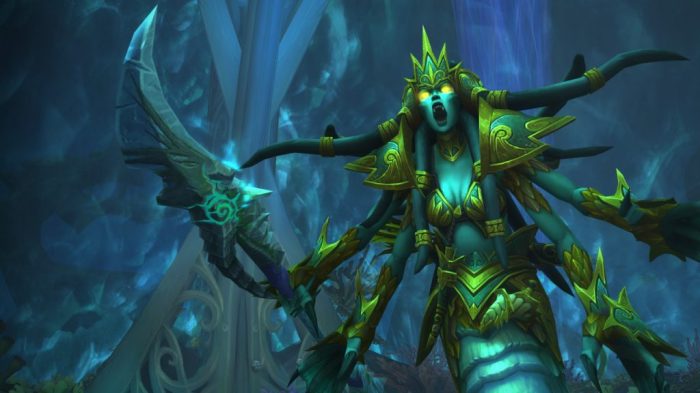 Although finishing EN/TN raid tiers is still my raiding priority these days, I’m also starting to explore the new raid.

I’ve completed three runs by now. Aurinko the Priest got a healer’s trinket, Backston the Hunter got her tier wrists, and Paitsu the Monk who went as a healer got gauntlets and legguards from her tier – and without extra coin rolls.

I liked the lore very much. Probably my most favorite theme in every game, cartoon or movie is assembling something big out of parts. I’m a fan of Elements or other concepts alike. So no wonder that the whole thing of Pillars of Creation is my thing 100%.

In every wing we will be putting the Pillars in their slots – and before we assembled them. By the way, it must be checked if they are removed from storage in Dalaran after you get the raid achievement :) Would be awesome.

The first wing is water-themed, and naga are bound here perfectly.

I conclude that the room in Warcraft 3, where we learned about that naga were elves once, is the same room where we fight the naga lady Sassz’ine. On my next trip there I’ll run around after the raid ends – for exploring and matching both maps in my mind.

The raid design is beautiful – I don’t even mind the darkness. Since Warcraft 3, the levels above water were cleared of seaweed and everything.

Goroth is a fun encounter. He is relying on AoE attacks, and following the mechanics is easy and comprehensible.

Harjatan. I’m not a fan of the fight, it’s basically his thick skin to address and some adds to be switched to.

Sassz’ine is cool. There’s lots of stuff to do, the field is tight enough to make avoiding multiple void zones an interesting problem. The only thing that I don’t understand is ink clouds. I know how to get this debuff by stepping in violet pools, but I’m completely unaware of where to carry it and at which moments.

In general the raid encounters design somewhat elusively reminds me of old arcade games, like it was the case with Blackrock Foundry. It’s like the best things were borrowed from them, but not a single annoying one. If the other bosses and wings will be as interesting, it’s gonna be my favorite raid in Legion.

Everything’s good with The Gates of Hell. Well, maybe except a wing name :) Tomb is not exactly hell, and naga wing is about Tidestone and water, not about Legion troops guarding the entrance.

3 thoughts on “Tomb of Sargeras: A Peep into The Gates of Hell”