I guess I’m in the middle of the main questing line, so a small review now about the zones.

I’m not in a hurry reaching 100 level at all, as I take my pace and slowly explore the lore, reading everything carefully. There is a very nice new feature, as most npc characters along your journey add up to the quest texts with their dialogues, turning your quests into a real movie. It was used before, but never so extensively.

So far Micromantica the Gnome Ice Mage is 96 and will finish the last leg of Talador today (shadow orcs), and Schlitzchen the Goblin Enh Shaman made it until 94 and establishing her Talador base.

Alright, on to my impressions about the zones (spoiler alert!).

The region is very nice, but I normally I don’t like the shadowed zones. Even if it is so peaceful. The storyline was uber epic! First, you discovered a spy among draenei. Second, you stormed the fortress of shadow orcs with the soul-tearing death of Yrel’s sister. Third, you witnessed the destruction of Karabor – watching movies, I always want the villain plans to come true, and only then defeated. You know, if super weapon never lets itself a single shot – what’s the point… It was so good that Blizzard let us participate in both the good and the bad finale! Fourth, it’s the siege of Karabor – with atomic scales ending.

Btw, small off-topic about character deaths in movies and games. I discovered quite a strange thing: it’s not the actual death that matters and moves your soul, it’s the grief of other characters!

You probably all watched Lion King. Mufasa’s death wouldn’t be even close to how strong this scene is now if it were not for Simba, the little one, who’s so sad that you cry all the liquids out of your body each time you watch it.

Same thing here: Samaara is mourned by Yrel, and it’s a soul-ripping scene, but Velen – erhm… that probably should be sad. Epic, yes, but not even close to Samaara 5 minutes ago, even if we knew him well and he’s much more significant character, while we didn’t even had a chance to talk to Samaara.

Extra questlines: I liked the dragon forest, the mushroom swamp and the botani swamp (creepy!). Small Rulkan’s orcs questline – I felt it was not necessary and they could open the gates to shadow orc fortress more straightforward than returning near your garrison. This area was an already-used one, so it felt like a step back.

At 94 they give you the new quests with Guldan, and it’s a blast being a good link to Talador.

Frostfire for Schlitzchen was pretty plain. There’s no such variety as in Shadowmoon, as you merely push the Frostwolves forward, conquering them new lands and places. Anyways when you hear “Run with the pack” and being the only class (shammie) who actually CAN RUN WITH THE PACK is pretty amusing and you want to help them. The highlight of the zone is of course onslaught on the ogre fortress. It’s pretty epic, and definitely a replayable line. The only drawback is that you claim the height first, then clear the area at the bottom. Maybe it could be more logical to do it vice versa, but at the same time you always do vice versa, so it’s a nice change in quest routines :)

Other things you do there is almost always attacking this and that orc camps. This alien orc clan feels like an outsider in the Iron Horde, so you feel like they’re a piece of cake and don’t pose any real danger. But it gives you an impression that you’re messed up in a real clash between clans that continued long before you at this territory for many years, so it adds up to your involvement.

Epic ending! But you expect Frostfire to be over after a cinematic, not do some extra grinding. Ugh.

I don’t know if it’s a good decision to split the zone in 2 parts – and give an opportunity to play only one of them. Anyways, did botani questline for Schlitzchen and gronns for Micromantica, and they also divided Lumber Mill and Arena between them. So I grabbed everything of Gorgrond.

I like Botani! But from what I saw in Shadowmoon, I expected much more creepier stuff. You practically chill in your seat when you are playing missions with infested Terrans in Starcraft.

But alas! They didn’t make it with same terror even when a whole big place was devoted to botani.

I feel that the botani theme could be developed quite more, as it has much potential in it. And please make it scary!!

As for gronns, it’s rough and brutal, as it should be, and it leads to epicness of enslaving this killing machines by Iron Horde. Also you meet Rexxar with his fellow beasts (W3! W3!) and you’re transformed in a goren – that’s never dull, acting like a creature.

Ogre arena – erhm… a grinding ground. Didn’t feel like ogres or arena. Sabre-tooth guys – didn’t like them, so they are a perfect foe to deal with.

Ending battle – was cool, but… did we leave it like that? At the gates?.. ok, we’l return, but job felt VERY unfinished. Even for now. 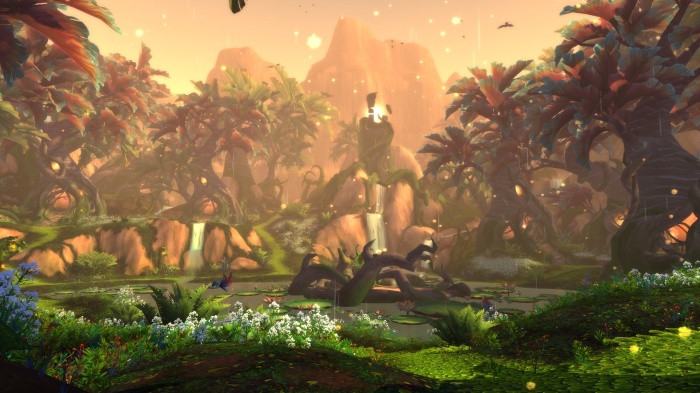 Talador, Arak, Nagrand – when I finish with them :)

See you next time!

What were your impressions on the zones and questing at Shadowmoon, Frostfire and Gorgrond?